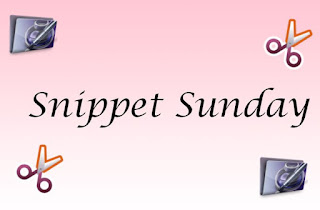 Well it’s Snippet Sunday and I agonized over what I should do. Should I do something from a past novel or from book 4…
And lucky lucky you I have decided to share a little of book 4 with you.

Hunter looked down the dark hallway and swallowed the past the urge to break the man in half. Treachery was wrapped around the Guardian and he wanted nothing to do with him but to throw him into a pit in the ninth level of the Infernos. First though he would need to get whatever he was betraying and turn it over to Dante. Then the bastard belonged to him.
Hunter checked behind several doors but found nothing interesting. James finally pushed past him, “Last door, dumbass.” James snapped, pushing past him. Hunter was going to enjoy making James scream.
Hunter followed him into the last room and stopped short. “Who is she?”
“None of your business.” James spat.
Hunter grabbed the Guardian and pinned him up against the wall, “Who is she?” he growled.
James sputtered his eyes wide. “I’m not telling you. She belongs to me. I will only tell Dante.”
It took everything Hunter had not to shake the hell out of him, or kick the shit out of him. But Dante had sent him to answer the Reaper call. So few people used the damn think anymore.
Hunter threw James to the floor and walked to the bed, the woman looked unharmed. She was beautiful, light skinned and blonde nearly white hair curled around her face. There was something very light about her. Hunter couldn’t place her Other side. But she was light if he ever saw it. He growled and turned back to James, “Are you her Guardian?” he demanded.
James had pulled himself to his feet, “I refuse to say anything else. I will only answer to Dante now.”
“You’re an idiot.” Hunter told him. He picked up the woman gently and turned back to James as he started to argue and grabbed him by the collar of his shirt. Without warning he Flashed them to the Infernos.
James landed on his knees, which was a good place for him to be.


I hope you enjoyed Snippet Sunday!!